How are ratings calculated?

Ratings are calculated using Evan Miller's method (based on a Wilson score confidence interval) that is self-correcting. This means that the % of positive ratings & number of ratings decide a mods position on the top charts. The benefit of this approach is a mod with 2 positive ratings will not outrank one with 10 positive ratings but 2 negative. Nor will a mod with tons of rankings outrank everything unless most of the ratings are positive.

The CRN Defender Mk-2 is the latest iteration of the CRN Defender Main battle tank, the Defender Mk-2 is the evolution of the Defender line, more sophisticated and better equipped the Mk-2 is a deadlier defender. Complete with a dual fire control system the Defender 2 has improved redundancy in its systems so if one gets taken out you can still use the other. Coupled with a redesigned turret and an improved road wheel management system the Mk-2 improves on the old defender model and makes it better. In conjunction with improved frontal armor the Defender 2 is a more survivable platform compared to the Defender 1. Furthermore the Defender 2 is equipped with a new state of the art sentry early warning system, to help target unseen foes hundreds of meters away. With a redesigned turret the Defender 2 has a less vulnerable turret ring, which further improves the tanks survivability on the battlefield.

The Defender 2 is the natural evolution of the CRN's defender Main Battle Tank. Moving into the 2970s the CRN realized the need for a new modernized MBT, and so instead of building from the ground up CRN designers opted to redesign the Defender 1's turret, and add on to the existing chassis of the Defender. The CRN also set out to add improved armor to the Defender platform for increased combat capabilities, this new Defender model was a vast improvement upon the old Defender platform. These modifications coupled with restructuring in the CRN's design of tanks meant that the Defender 2 was able to surpass the Defender 1 in terms of capabilities. On the battlefield these modifications showed how the CRN could be successful in modernizing its aging fleet of ground vehicles, and with the Capella conflict, also known as the Centurion Bug War. The CRN Defender 2 crews tasted combat for the first time on Capella, in the battle of blue ridge. A several month long slugfest between the Republic forces and bug forces. For several months the CRN tried and tried again to get on top of Blue ridge, and for several months they were kept back by enemy artillery, and elevated firing positions. Working with old Defender 1's CRN Marines, ODT's, and Ground Corps units slugged it out with the Bugs. This was until CRN Defender 2 tank crews arrived, in conjunction with the CRN's brand new Paladin MBT's, Warrior IFV's, and Badger APC's. The CRN was able to make an armored charge up the ridgeline. This charge was a slow and arduous march to the top but the CRN was making progress on the ridgeline. By the 25th of July a whole two months after the battle started the Republic was able to get to the top of the ridge. The casualties taken were innumerable, ranging in the thousands. But the last true stronghold of Capella 1 had fallen to the Republic, giving the CRN near unimpeded supremacy of the last enemy holdouts. The Defender 2 also fought on Arcadia where the Bugs had besieged this vital military asset to the CRN, at the start of the siege the CRN had to cede large swathes of the planet to the Bugs just in the hopes that the CRN could regroup and counterattack. On July 3 of 2990 the CRN president was forced to make a nationwide statement that if Arcadia fell the CRN would be forced to blow the planet, but proceeded to assure that the planet would not fall. The bugs would have to fight for every inch of ground still held by republic forces. Outnumbered and outgunned what little Defender 2 units were on the planet had to fight like hell. Several major cities on the planet were taken over by the bugs. But on the 20th of July the CRN guard divisions were able to be resupplied and reinforced, With the CRN routing most of its combat forces to Arcadia. The CRN was determined, and so were these Defender 2 crews. On the 22nd the CRN made and armored charge against the Bugs, at the core of this charge was the Defender 2, rushing across the ground taking potshots at any bug emplacement. The armored charge was successful in cornering a massive amount of bug units. This counterattack was enough to destroy massive chunks of the enemy units on the ground. Which further helped the CRN take back the ceded territory that was given up. Which a month after the Bugs made first landfall on the planet the CRN and Defender 2 crews were able to fully push the bugs back into outer space. Where they subsequently retreated back to unknown territory. Much like the Defender 1 in the battle for Nova prime the Defender 2 stood like a stone in the midst of a storm, born in a baptism of fire the Defender 2 proved itself as the CRN's newest most capable MBT. 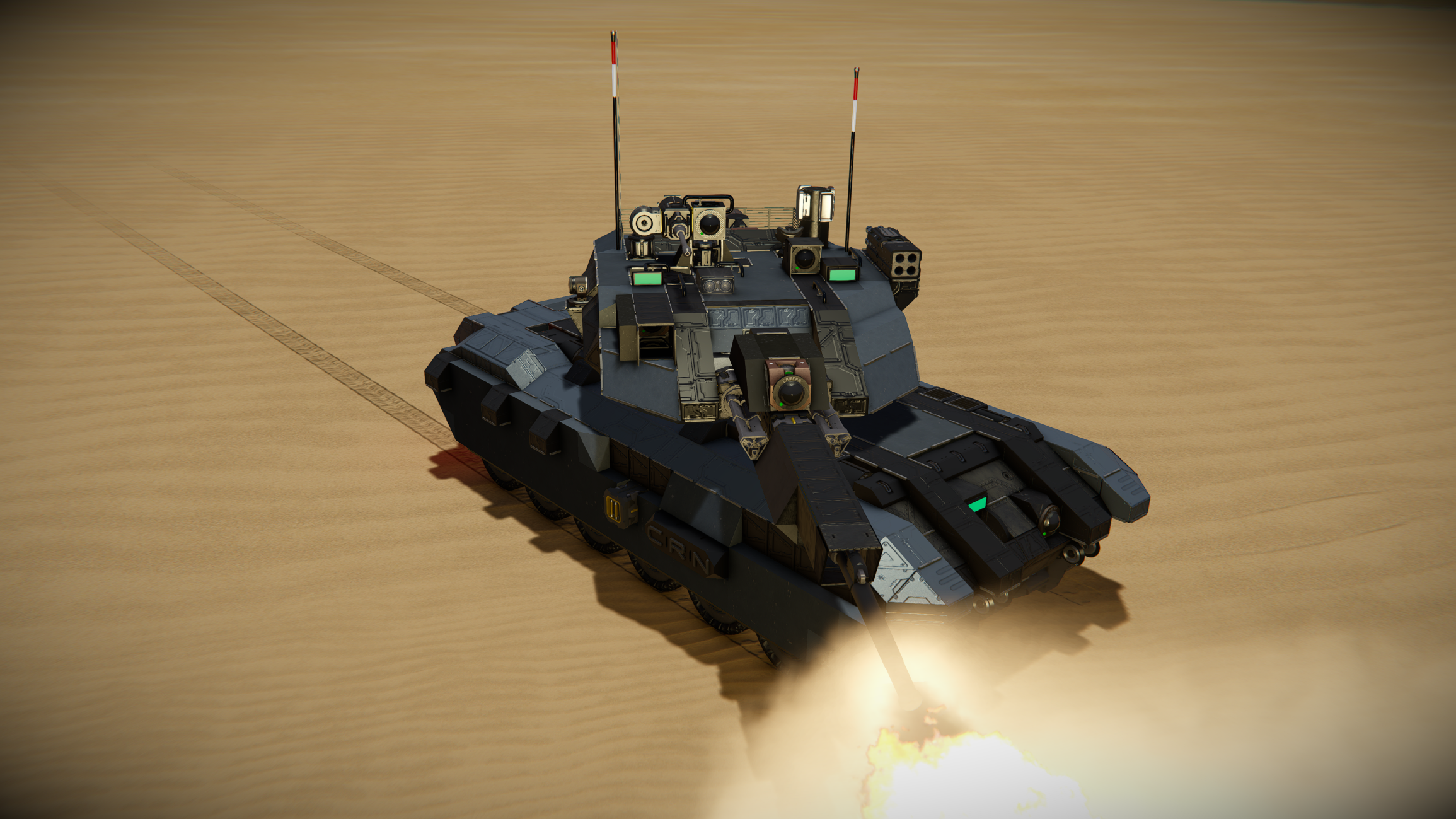 Hey! This tank has been an idea Ive had for some time, mainly because I needed a replacement for the Defender as its armor and firepower wasn't really good when it came to dealing with assault cannons or railguns. So I decided to put the idea off for a while, and just make an entirely new design the Paladin MBT, which should get uploaded soon aswell. That tank has much better armor compared to the old Defender, and was the real spark where I said "hey I can do this". Which I've slowly been "standardizing" my tank design so it feels more like me and my style. The Defender 2 basically improves in all the Areas where I couldn't figure out issues with the Defender 1. I redesigned the turret, gave it better armor and redesigned the gun barrel, I also gave it the ability to switch turret control between a script and a custom turret controller the "dual fire control system". It adds redundancy but it also means that people on Xbox can use the tank turret without having to put in extra steps to get the turret working. It still uses scripts for driving but, that pb can be turned off if your in a world that doesnt allow scripts or you are on xbox. Discord.gg The link to my Discord server if you want to join. Anyways, enjoy and stay happy and healthy!

No items were found matching the criteria specified. We suggest you try the item list with no filter applied, to browse all available. Join now to share your own content, we welcome creators and consumers alike and look forward to your comments.

thank you so much!!